First time in my life, I went to “Japanese Alps”, a breath-taking view at height 2,612m. The temperature was 16 degrees Celsius.

The following are the photos of colored fruits, flowers, birds, scenery, etc. observed in the winter mountains, which look good on Christmas and New Year. They were taken in cities of Toyohashi and Tahara, located in the Atsumi Peninsula.

(translated mostly from Japanese)
I feel rather cold this winter than usual. Indeed, I tried to go to the university and had the experience of putting out the car after doing “snowplow” for the first time. There was never such a thing since I came to Toyohashi.

Well, it is still a cold day, but after “the first day of spring” (called “Risshun” in Japanese), I feel that the sun is gradually springing. On the weekend, I determined to get out and go search for the male of a flanked bluetail bird that I have never seen, “I see, I seek such a day in this neighborhood forest to find a happy blue bird!” First of all, we received a welcome of nearly full-bloomed white plum and admired “Oh, spring has now arrived”. Then, the babbling brook reflects glitteringly and I gradually moves along the beautiful stream to the depths of the forest. . . . . After a while the blue stuff ran across the eyes. Looking up at the branches of the tree where it stopped, “Wow, No way”, “It was really a flanked bluetail bird of male!” As I was about to drop the portable camera for the first encounter, I removed my gloves and switched on the camera. It is quite difficult for me to focus because the bird moves very quickly. I was finally able to shoot some shots by holding down my feeling of getting hurry. Well, I was hoping such a day would come, and one for my dreams came true, and I decided to think that someone (maybe the heavens) gave me a reward, so I went home on the way back. I think I will come to see a flanked bluetail bird again.

We went Matsuyama city for attending the Workshop “Forum of Information Technology” (a.k.a. FIT2015) held in Ehime University. There was a costumed mascot character “Mikyan”. “Mikyan” seems to have its name from “Mikan” in Japanese (orange), where Ehime prefecture is famous for producing many oranges.

We have not updated English Web pages for a while. Now there is a big news. We received the best paper award from APSIPA (Asia-Pacific Signal and Information Processing Association) in APSIPA2013 held in Kaohsiung, Taiwan.
The following pictures demonstrate some flavors from the international conference.

One month has passed since new acdemic year began in April. We now enjoy a season with lively wind with fresh green leaves and shoots.

Re-organization of TUT educational system and carricula has met the second
year, and it proceeds to students of both first and second grades. From next year, re-organization will be permeated into the 3rd grade, majority of students in TUT.

The pictures below are the patio of TUT after rain (left) and a dogwood in bloom (right).

A new academic year will begin from tomorrow. During the last part of this academic year, we have seen the unexpected incident along the eastern seashore of Japan, since mid March. We do hope that the new academic year will end up with plenty of smiles. The following are recently taken photos near our university; Japanese magnolia (left) and the Umeda river (right) two kilometers from our university, where a shoal of carps are seen. Spring is surely coming.

We, members of KDE laboratory, extend our heartfelt condolences to all those affected by the devastating disaster and our thoughts go out to those suffering in its aftermath. We do hope that the regions will sustain no further damage and will soon be able to begin the rebuilding and healing process.

Although our university, located in central Japan, has been as usual as before, our laboratory has several current students and alumni coming from those regions. The loss of many human lives and their homes as well as the loss of coastal beauty of north-eastern seashore of Japan are deeply felt. Now more than ever, we believe that accurately gathering, monitoring, extracting, retrieving, predicting, and delivering the genuine information to whom it is required in real time is utmost important. Therefore, we would like to declare that we will conduct truly practical data/text mining and media retrieval technology more extensively from now on.

Hope visitors of this page are going to like it.

The 13th WI2 (Web Intelligence and Interaction) workshop sponsored by IEICE was held in Yokohama from December 11 to 12th. Our labolatory boasts of almost 50% rate of attendance to this WI2 workshop so far. This time, three of M2 graduate students have dared to present their research progresses. It seems that our presentaions attracted attention to audience, and we got some valuable comments from attendees. Thanks are go to our graduate students. 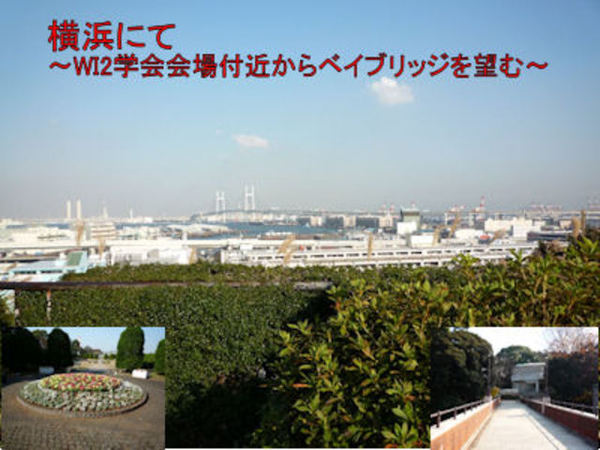